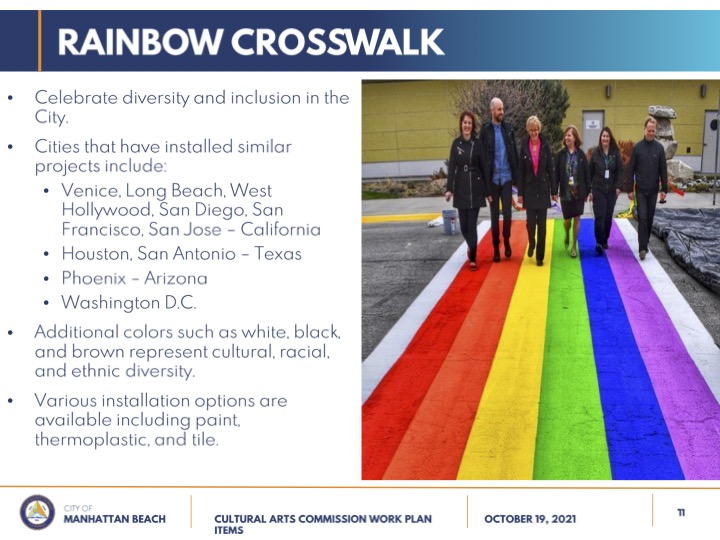 The City Council, on Tuesday night, approved installation of two crosswalks striped in the colors of a rainbow, one at the foot of Manhattan Beach Boulevard, where it meets The Strand, and the other at Polliwog Park.

The rainbow crosswalks, a symbol of acceptance for the LGBTQ community, were one of multiple public art projects authorized by the Council, which included a large digital screen at City Hall that will feature local art, and repairs to the fading John Van Hamersveld frieze mural at the Cultural Arts Center. Council also directed staff to investigate construction of a permanent bandshell at Polliwog Park.

But rainbows were at the top of the ticket, attracting voluminous public comment, for and against the crosswalks. The original proposal by staff was for rainbow crosswalks at Manhattan Beach Boulevard at Peck Avenue, near both Polliwog Park and Manhattan Beach Middle School. Crosswalks covering all four street crossings at the intersection were projected to cost roughly $80,000.

Resident Linda Reeves said that as a licensed family therapist who specializes in treating members of the LGBTQ community, she has seen the negative mental health impacts that result from the lingering stigma her patients face, something she has also experienced within her own family.

“I am the proud mother of a gay son who grew up in Manhattan Beach, and often struggled against anti-LGBTQ stigma,” Reeves said. “I think of the numerous afterschool pickups when I would see my son walk across Polliwog Park, and slump down in the car, with no energy or joy, and would share about how he’d been bullied and teased by the kids for being gay. When I heard this crosswalk was a possibility, I was overjoyed that we would finally have a simple message of love and support for this vulnerable population, and to also positively influence the perception of the larger community.”

“It felt, in some way, like a safe place,” Cicchino said. “This is a powerful symbol of acceptance. As far as diversity is concerned, it is an important invitation for healing at a time when our community is really asking for it.”

“We are Manhattan Beach,” said Diana Skaar. “We are an inclusive community that supports our friends and neighbors. We do not shy away from celebrating diversity, be it sexual orientation, gender or ethnicity.”

Heather Kim said the rainbow colors would be distracting, and create a public safety issue. She also said that, to her, a rainbow has religious connotations.

“It’s God’s promise that He will never destroy the Earth by the flood again…” Kim said. “So if you don’t want to endorse the Bible and God’s promise, I would recommend you not putting this on there, because that’s what we’re going to see every time we see it.”

Charlene Hardy said the rainbow symbol would be exclusionary to some residents.

“I think we should be inclusive of all residents and put something up, if we have to, something that is artsy — that is just All-American, like a flag or an ocean scene,” she said. “But I would prefer to leave things natural, and not have little artsy things in different corners representing small portions of our community. I’d rather see our town look classy and natural.”

“Just no on the rainbow crosswalk,” said Ray Joseph. “I cannot handle anything else political in our town.”

The council unanimously favored the installation of rainbow crosswalks. The only issue was its location and cost. Councilperson Suzanne Hadley thought the original price tag was too steep, and the location at a busy crosswalk was problematic from a public safety standpoint. She suggested locating it within Polliwog Park, in the actual shape of a rainbow.

“I like the rainbow,” Hadley said. “I am about safety, and moving it away from the schools…. If it’s not on the street we don’t have safety concerns…. On one of those curbed portions of Polliwog, those are high traffic areas, kids can interact with it, they can draw, put little signs, take selfies. It’s on school property, it’s by MBMS, and I think it would be bright and cheerful.”

Councilperson Steve Napolitano had an idea that he argued met Hadley’s safety and cost concerns.

“I think the better, higher impact location would be The Strand at Manhattan Beach Boulevard,” he said. “It’s not an area where cars are flying through, because it’s a dead end. They have to slow down and circle around.  It’s where we hold a lot of major events, and it’s where there’s a constant parade of people walking, and running, and people can see it from up above on the hill.”

In the end, after nearly delaying the decision in order to explore the pros and cons of different locations, including North Manhattan Beach, the council arrived at another idea —  do both the location suggested by Hadley and by Napolitano, limiting the cost of each to no more than $20,000. The motion passed unanimously, while separate motions to repair the Van Hamersveld mural (at a cost of $40,000) and install a digital screen in City Hall (at a cost to be determined but roughly half the proposed $300,000, smaller and without a protective coat on the screen) passed 3-2.

The only reservation expressed regarding the rainbow crosswalks was by Councilperson Joe Franklin, who grew visibly emotional as he talked about ways to move beyond symbolism and into more direct action, such as creating an art program featuring art from the local LGBTQ community. Finally he paused and apologized to his colleagues, explaining that throughout the discussion he could not stop thinking of his late brother, who died young, a victim of anti-gay stigma.

“One is not supposed to have favorites, but he was definitely mine,” Franklin said. “He was a talented athlete in high school and received scholarships to play in college. In fact, he is featured in his college sports Hall of Fame for lettering in three sports. But I know he suffered the stigma of being gay in his time, which caused him anguish and pain throughout his short life. That was a different time. But he would have benefited greatly from such services in his earlier years. I truly believe that Manhattan Beach is an inclusive and welcoming community. But there’s always more that can be done. If we think outside the box, rather than following the footsteps of others, Manhattan can take the lead in creating an art program and services that will truly have a positive impact in the lives of the LGBTQ community.”

comments so far. Comments posted to EasyReaderNews.com may be reprinted in the Easy Reader print edition, which is published each Thursday.

Here’s where Manhattan Beach will paint a rainbow Pride crosswalk

Kings of the South Bay

Read Kings of the South Bay by National Hockey League

Joanne Clark: ‘Kick it up’ at the fair

Read Joanne Clark: ‘Kick it up’ at the fair by The Union