The formation of a development company to build rail stations for a bullet train running from Dallas-to-Houston is the latest step in a decade-long effort to push the plan down the tracks.

Dallas developer Jack Matthews and his partner, Fort Worth businessman John Kleinheinz, said Wednesday that they plan to develop more than 50 acres of land south of downtown Dallas into a high-speed passenger rail terminal. They’re working on similar projects in Houston and near College Station. “Our high-speed rail project connecting Dallas and Houston will be as transformational to Texas as DFW Airport was to the region when it was opened in 1973,” Kleinheinz said in a statement.

When did the bullet train plan get started?

The project has been inching along for better than a decade, slowed by environmental studies and legal fights with Central Texas landowners along the proposed route. Texas Central Partners, the private company behind the project, was created in 2013, although predecessor versions date back to 2009. 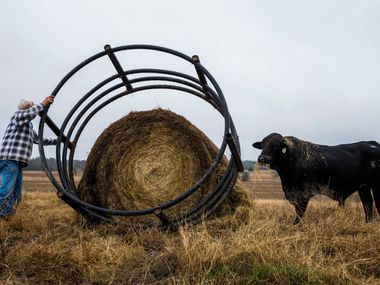 Texas' rural roots and urban future are on a high-speed collision course over a bullet trainBy Jill Cowan and Brandon Formby, The Texas Tribune|

Why has it taken so long?

Lawsuits can take years to resolve. In June, the Texas Supreme Court handed project advocates a major legal victory when it declined to hear a case brought by property owners determined to preserve land rights.

That lawsuit had been working its way through the Texas court system since 2019 when a district court in Leon County initially ruled the company was not a railroad, and therefore could not use eminent domain to seize the property it needed to build the route.

Where would the train run?

Texas Central wants to create 90-minute high-speed rail service between Houston and Dallas, with one stop near College Station. It would stretch over 240 miles and replicate the Japanese Tokaido Shinkansen bullet train system, which has electric trains that are projected to emit less carbon per mile than a commercial jet.

In Dallas, Matthews and Kleinheinz envision a train station in the Cedars neighborhood near the Kay Bailey Hutchison Convention. The Riverfront Boulevard site has been targeted for the new train station since plans for the high-speed train link were put forward a few years ago.

The group also owns 45 acres in Houston on the former Northwest Mall site northwest of downtown near Interstate 610 and 59 acres in Grimes County near College Station.

Texas Central company signed a $16 billion contract this summer with an Italian firm to build the rail system. The all-electric rail line is expected to cost at least $20 billion and still faces construction and funding hurdles.